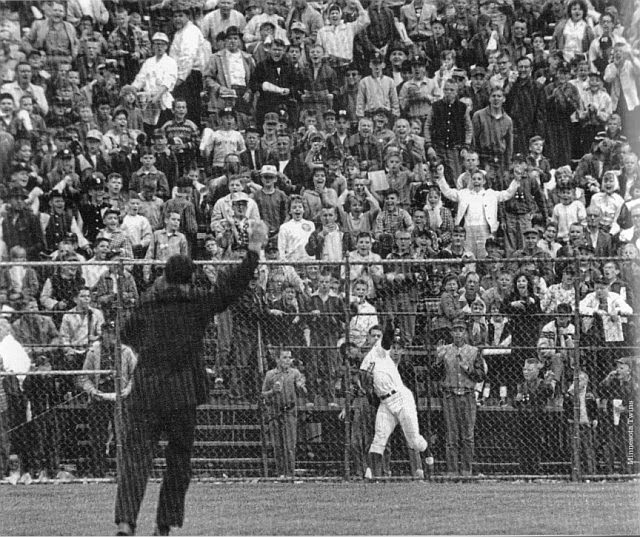 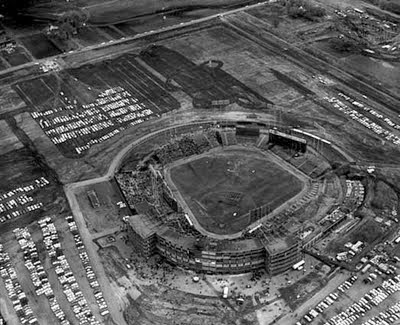 The Met parking lot - the former cornfield was only partially
filled for that very first game in The Land of 10,000 Lakes.

The first Major League Baseball game in Minnesota history took place just four days after the U.S.-led Bay of Pigs invasion of Cuba. On the day of the game, President Kennedy was receiving communiques from Chairman Khrushchev, with ominous warnings against future interventions in Latin America. Also portentious that week was the Kennedy Administration's promise to the government of Laos to send about 300 U.S.military advisers into combat zones to help turn back communist insurgents in that country and others in the region; a ceasefire was in effect in Laos (Salt Lake Tribune) while the politicos assessed strategy. JFK this week also sent a private memorandum to Vice-President Johnson asking "Is there any space program that promises dramatic results that would represent a victory against the Soviets?" This would be the kick start for the greatest engineering, technical, and scientific undertaking in history - the Apollo program. 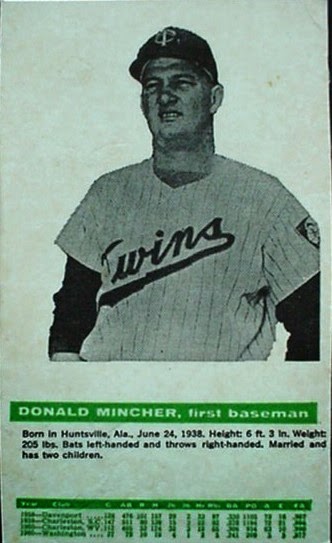 Don Mincher is the trivia answer to the
question "Who hit the first Twins regular-season
home run at Metropolitan Stadium?" For the other
Twins ballparks, Gary Gaetti (1982, the H.H.H.
Metrodome) and Jason Kubel (2010, Target Field)  will do.

Alas, the only sure win that week for Washington was secured by it's brand new American League entry. The Senators's invasion of Twins territory produced a 5-3 win that was decided in the ninth inning (BBRef). It was a sterling, close affair, with standout efforts by Minnesota's Lenny Green, Don Mincher, Camilo Pascual, Senators's slugger Dale Long, Washington starter Joe McClain, and reliever Dave Sisler. The latter escaped a bases-loaded, one out situation against Minnesota in the final frame.

First, however, it was preceded by a gala welcome home for the Twins players and representatives: 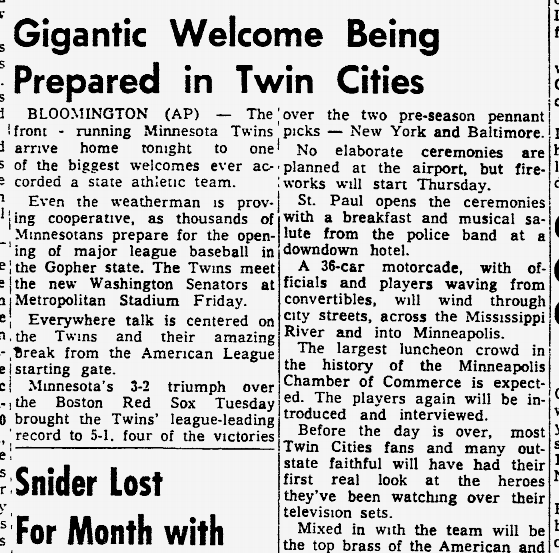 The parade on Wednesday was joyful... 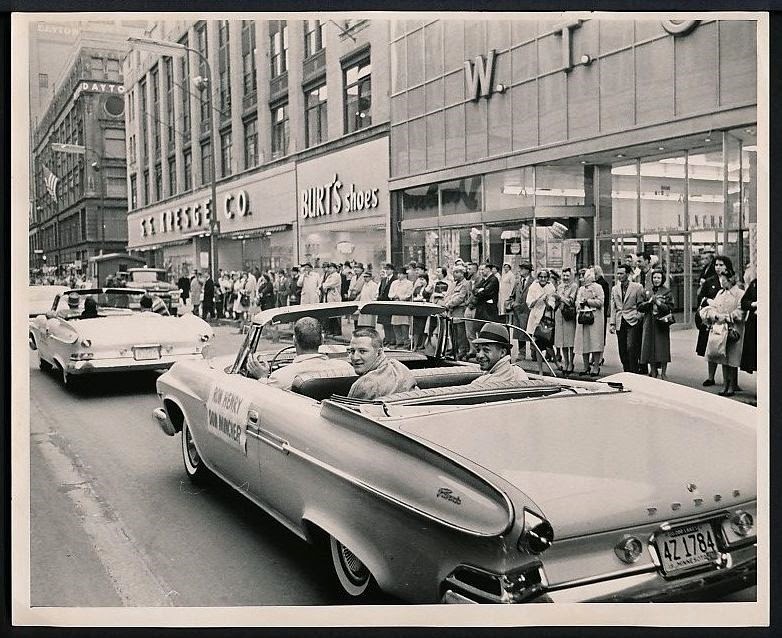 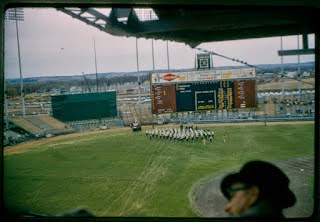 The University Of Minnesota Marching Band arrives from center field for lineup
introductions...and stayed lined up in the infield for the National Anthem. Note lack
of seating in the foul territory behind first base. Construction of seating came to
a halt when the game commenced, and would resume after the last out. 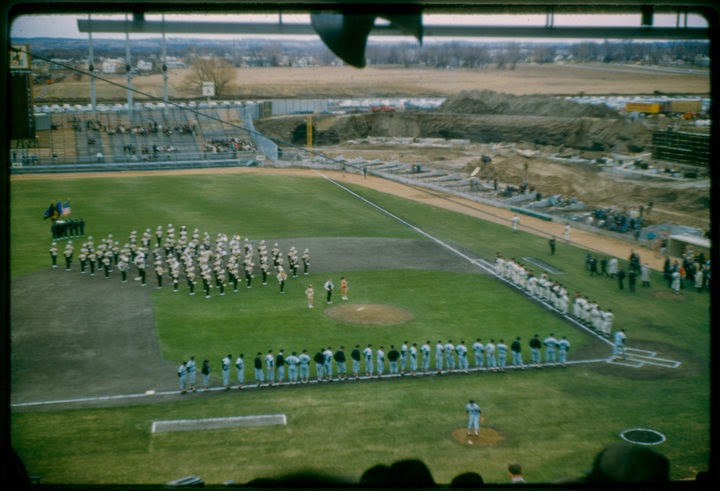 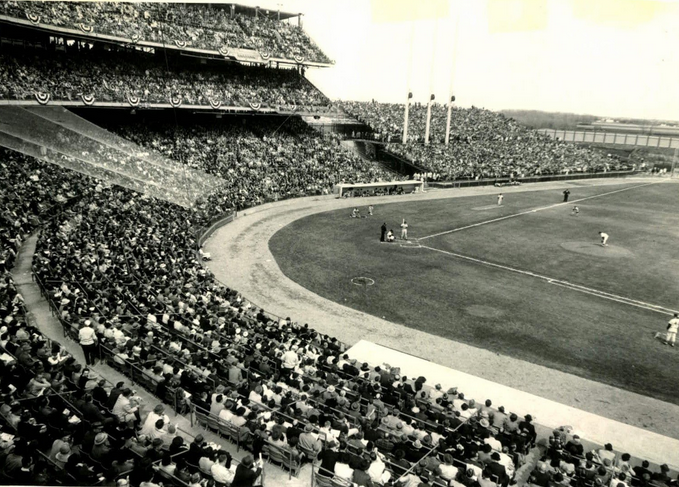 Note: signature walk-up path not yet constructed, from dugout to homeplate

The Met as it looked on April 21, 1961 (BBRef), with Camilo Pascual on the mound; watching near the home team dugout were dignitaries such as  AL President Joe Cronin, MLB Commisioner Ford Frick, former NL President Will Harridge, Minnesota governor Elmer L. Andersen, and the mayors of Minneapolis of St. Paul (but not Bloomington Mayor Gordon Miklethun - the home ballpark in the city's limits apparently didn't confer upon him any special status!). Go to The Sporting News of May 3, 1961, and you'll read a rather pessimistic summary by George Moses of the Associated Press. You might think he took his lead from AL club owners still unhappy with Twins owner Calvin Griffith's push to move the franchise out of the nation's capitol. If Moses had taken the time to get the Minnesota fan's perspective (accessible in this account in the Winona (MN) Daily News of April 22, the tone would been much truer to the reality at the ballpark that day. Jim Wallace of the Brainerd Daily Dispatch ("It Wasn't That Bad") also had a nice rebuttal in his column the next day. 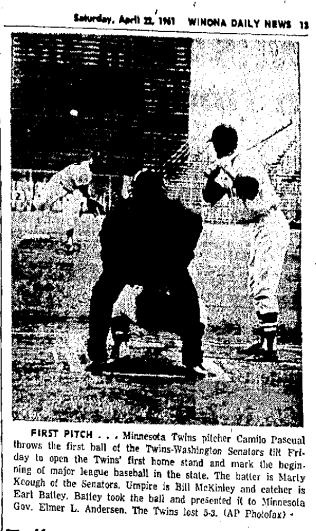 That the game only attracted 24,606 was a curious circumstance, however, given the lead-in hoopla. The forecast for that day was for temps in the 50s, with clear skies. It ended up an an overcast day, 63 D., but with no rain. So - what was up? A contributing factor may have been the absence from the starting lineup of Harmon Killebrew, who had pulled his left hamstring muscle running out a grounder in the Saturday, April 15 game at Baltimore (Twins game #4 in the '61 schedule). It was thought he would miss three weeks, but he rested for only two, reappearing in the April 29 game versus the Angels.

Minnesotan's may well have taken the attitude that without a big fly in the offing from Killebrew , the effort just wasn't worth it. Otherwise, I would posit that, despite the joy evident from acquiring a big-league team, rank and file Minnesotans just didn't have it in their mindset to take time off from work in that era, or to pull their kids out of school just to see what we now regard as history. Part of a region's character, you might say. Nevertheless, the opening ceremony was a fun spectacle, as this historic video makes clear. 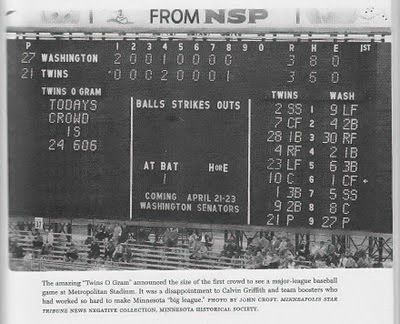 The Metropolitan Stadium scoreboard during Senator
Willie Tasby's ninth inning at bat  on that April 21, 1961. 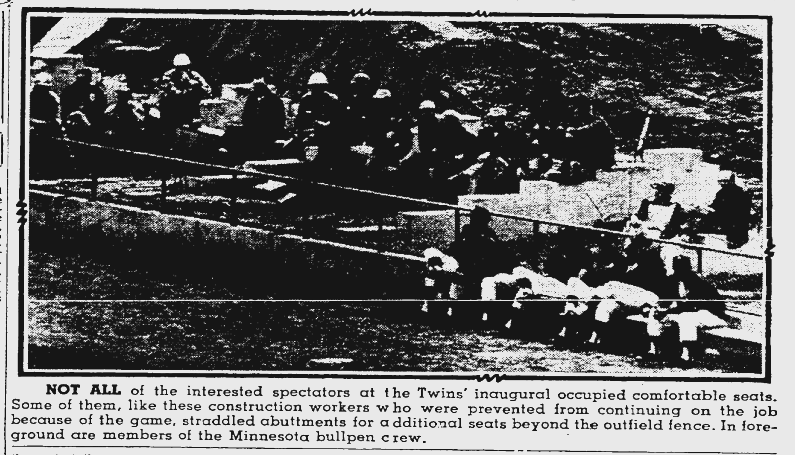 Pascual pitched 8 innings that day, giving up three runs with 3 walks and 4 strikeouts (he would lead the league in that figure, 221). After giving up a long ball to first baseman Dale Long in the first, he appeared to right the ship. When Lenny Green homered to what would later become the right field bullpen to tie the game at 3, the Twins looked poised for a 9th inning rally. It wasn't to be. Washington pushed across 2 in their half of the ninth off trusty, "Old Blue" Ray Moore. Green was also the first Twins player to score in a home game, jogging home unfettered on Mincher's fourth inning bomb over the center field fence.


There are 8,000 things worth commenting upon in this short piece. But, the one I
most enjoyed was the narrator's pronunciation of "Minna-SO-tah" at the very end.
As if he was hip to the fact we have 10,000 Norwegians per acre in these parts.

Yes, a disappointing start, with nary a stampede through the turnstiles - but it wasn't a disaster. The Twins would win the next two games and the series that weekend, Sunday's game being a 1-0 shut out for Jack Kralick. Minnesota would eventually reach that coveted 30,000 attendance figure in game number 34 - a doubleheader on May 21 (BBRef, the 20th & 21 home games) versus Cleveland. Overall, they drew 1,256,723 for the 1961 season, third-most in the AL (of ten teams). Minnesota would go on to become a perennial home attendance leader in the American League, in fact, for the decade of the 1960's.

As Herb Carneal would phrase it: "So long, everybody!"
Posted by ClassicMNTwins at 9:18:00 PM