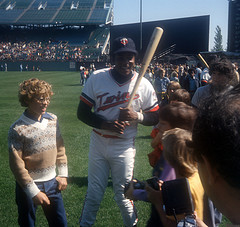 Today we call attention to one of the early, annual promotions staged by the Minnesota Twins. Camera Day has been chronicled slightly here at Classic Twins in a previous, early post, and here we get the full-color treatment. Among the finer nuggets of Twins and baseball treasures found on ye olde public internet is this collection of Twins players from Camera Day at the Met, before the Sunday, Sept. 14, 1975 game.

I think it's cool for the glimpse of civilian clothing styles in vogue, the team's uniform of the mid-70's, and the simple beauty of a sunny day at Metropolitan Stadium. Plus, none of the players are unbelievably ripped and "top heavy" (see "Jose Canseco"), as would become common 20 years later. Normal, is the word I'm searching for.


Rod Carew, Bert Blyleven, Lyman Bostock, Larry Hisle, Tony Oliva Phil Roof, Glenn Borgmann, Bill Campbell, Bill Butler, Porkchoppin' John Briggs,* Dave Goltz, Frank Quilici, Joe Decker, and Danny Thompson are all here for perusal - at least, they're the ones I can ID. It's one of the excellent, vintage collections at snaebyllej2's Flickr photo share site - worth a look, take my word on that. It's one of the few examples of close proximity fans could hope to have with players back then, when Twitter and the internet, card shows, fan fests, and 24-hour cable sports were miles away on the horizon.

As the great broadcasting professional Herb Carneal signed off, I say:
"So long, everybody.!" - TT
Posted by ClassicMNTwins at 10:31:00 AM