The well-ballanced, Tom Seaver-styled "drop and drive" delivery-
whom Santana should have tied for career Cy Young Awards
were if not for some ridiculous voter preferences for Bartolo
Colon and Mariano Rivera in 2005 Santana was plainly superior (see link)
Photo Credit: Steve Ellis

Johan Santana joined the elite list of all-time Twins Hall of Famers tonight, earning the exclusive blazer and a free, all expenses paid discount for a Murray's Silver Butterknife steak meal. It was a great night of Twins luminaries coming back to mesmerize Target Field, and a great acceptance speech by Santana. I completely remember my one and only Twins spring training visit in his 2000 rookie season. There wasn't much else to grab you with that team. The only other really notable development with the Twins roster heading into that year was the acquisition of Butch Huskey. Moving on...

We had gathered to watch him with the other spring squad members file into the main, Hammond complex on a sidewalk (located behind his catcher in the above frame) leading in from a side workout field. I remember turning to my brother-in-law, Mark, and gushing "There's the new rule five guy!," mindful of the mushrooming hype about him in the local, Minneapolis press dating back to the previous winter.

It would have been cool had he spent his entire career with the Twins. I was actually kind of done with him when he pushed for a trade to one of the New York clubs in late 2007. But, now in hindsight, New York...I get it. I'm only sorry they rode him into the ground with all the extra innings, higher pitch counts.

As it was, he was a brilliant meteor, with his career years and Cy Young Awards bunched together, like the Ks on the scoreboard displays around the American League. He was the best for about four, five years running. Like Koufax. Or, Koufax-lite, at a minimum. 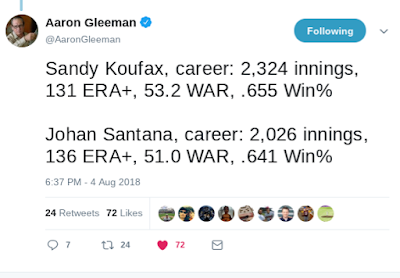 Comparisons aside, he'll likely never make the Hall Of Fame, but in his era, he certainly was in the discussion when the best pitchers in baseball were debated. A factoid: his career didn't take off until minor league pitching coach Bobby Cuellar taught him the circle change - echoing an earlier  circumstance in Twins history.

In the 1983 season, then-Twins pitching coach Johnny Podres taught a struggling Frank Viola the same pitch to complement his arsenal. The result? Two Twins Cy Young Award winners, and two with the same back story. The difference being that while Viola had been a second round Twins draft pick, Santana had been acquired by the Marlins on Dec. 13, 1999 as a Rule Five pick from the Astros, and then sending him packing the same day in a trade with the Twins for Jared Camp. Camp, of course, never pitched in the Majors.

Here is some backup for me regarding Santana being robbed in 2005 Cy Young Award voting:

Nov 8, 2005 Jayson StarkESPN Senior Writer Close Senior writer for ESPN.com 21 years at the Philadelphia Inquirer Author of three baseball books One of these millennia, the Los Angeles-Anaheim-California Angels were bound to have somebody win a Cy Young Award. Wouldn't you think?

"So Long, Everybody!" - Herb Carneal