I was there at the H.H.H. Metrodome to see the whole, mustard-slathered spectacle.

Wednesday night, May 2, 2001, was the defining evening for prodigal son Chuck Knoblauch, when he found out he was no longer the fair-haired boy of Twins glories past. In contrast, the original Biblical son received nothing like the rude, verbal ass-kicking and shennanigans that Knobby received  in that series-ending game at the Metrodome. It was the venue's most surreal, darkest ballgame ever. It's the only time my team won when I wanted to wear a bag over my head in embarassment.

Above, right: behold the culprit of the evening!
It had all started so wonderfully for Chuck in Minnesota. 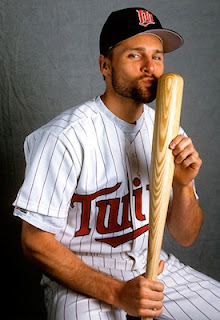 After he was drafted #25 in the first round of the 1989 draft, he apprenticed for just parts of two years (A: 139 games, AA ball: 118 games) in the minors. Then there was the 1991 Twins World Championship and Rookie Of The Year award; there were the four All-Star selections, three top-20 MVP finishes, two Silver Slugger and Gold Glove awards. He did all this with a single-minded pursuit that bordered on mania. I remember a televised, steamy game from Cleveland in '95 or so - he did everything, hitting for extra bases, stealing, fielding - he was a rocket-propelled runt. Sadly, when you coupled the off-season workouts with the mail order food supplements (some apparently of the legal variety) that transformed him from a slightly pudgy little fellow into an intense greyhound, you had a guy that became viewed as a diva. His relations with Twins Manager Tom Kelly became strained.


The lean years for the Twins extended from 1993 through the end of the Millennium. Knoblauch learned, as current Twins catcher Joe Mauer discovered in the summer of 2011, that (A) the fruits of losing made for an unpleasant aftertaste and (B) stars get the lion's share of criticism for the losing. The Twins traded away the Greg Gagnes, the Kevin Tapanis, the Scott Ericksons in a series of money-saving maneuvers until all at once, it seemed as if Knobby, Kirby and (later) Paul Molitor were the only sure things for the Twins.

Once Puckett irretrievably lost his eyesight, Kelly was left with mediocrities like Rich Becker, Scott Stahoviak, Pat Meares, and Frankie Rodriguez to pencil into the lineup after Knoblauch at leadoff. His wife at the time found him uncommunicative after frustrating ballgames, despite his personal successes. He signed a contract in late-season 1996, but the losses still mounted - and by the end ‘97, he’d had enough, and made known he wanted out. He got his wish, forcing the Twins hand.  Enter Cristian Guzman, Eric Milton, Brian Buchanan, and Danny Mota in February, whom the Twins wrangled away from the Yankees for his services.

When A.J. Pierzynski returned to the American League in 2005, he elicited similar antipathy. Like Knobby, he brought a bundle in trade booty: Joe Nathan, Francisco Liriano and Boof Bonser. What is it about the state's sporting public that they can't look good fortune in the face and see it for what it is?﻿ ﻿It's a paradox that's hard to fathom...

Ordinarily, a game that’s scoreless into the middle innings would be noteworthy on its own merit, with stellar pitching by starters Joe Mays and Orlando Hernandez. That helped create a taught, tense affair. It should have been a fascinating game. But there was something else at hand. As I watched that game in left field, I felt an increasing discomfort with what was going on around me; a crazed anarchy was in the air, very unsettling. Boorish kids of college age were giving it to the Yankees and Knoblauch; it wasn't just the loudness - it was the meanness, bitterness, bile, and beach balls pinging back and forth that made this freak show. One frustrated gentleman, obviously a middle-aged, Twins fanatic, was seen catching one of those bouncers, puncturing it, and telling the miscreants to "WATCH THE GAME;" his reward was debris and bear bottles thrown his way as well (oh, did that HURT my feelings!). This took place while the Twins were mounting a rally in the 6th inning.


A number of factors contributed to this evening's weirdness: 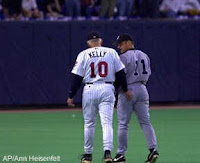 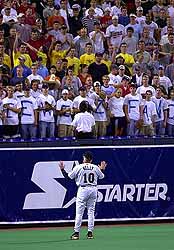 The letters on the backs of the imbeciles' shirts spell out
"Watch Your Back Chuck" when properly arranged. Nice!

At the same time, PA announcer Bob Casey was intoning with a perturbed urgency:

"Ladies and gentlemen, this is an important, championship ballgame. If the trouble in leftfield does not end, the game will be forfeited and the Yankees will win. NOW QUIT THIS!"

After 12 minutes, following the ejection of a posse of unrulies from General Admission, play finally resumed.  The Twins A.J. Pierzynski took a strike three called, and the Twins bullpen came on to stuff New York the rest of the way. That would have been the end of it, except that yet another flurry of Chuck-shucking happened in the 8th inning...resulting in another 5 minute delay. That stoppage promoted the umpiring crew to more seriously consider a forfeit ruling. But the threat passed when fans witnessed more ejections, and they yielded to sanity, finally. Shockingly, the game took only 3:01 to play. As a footnote, the Twins won, 4-2. 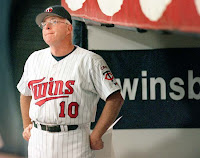 For his part Kelly was livid not only with the fans, but he also felt the stadium's sound system was playing so loudly that he couldn't convey his message to the offending patrons. ''It was a terrific game, and in my mind it was ruined,'' Kelly said. ''Hopefully, they can clean it up around here.''
"What in the name of the Wide
World of Sports is going on here?"

To his credit, Knoblauch understood that just a small minority was responsible, and resisted downgrading Minnesota fans and Minneapolis: ''They need to turn the page. It's been four years. I don't know what's going on here... Even after all this, I won't say anything bad about the city,'' Knoblauch said. ''It's probably a bunch of 16-year-olds who don't have a clue who Chuck Knoblauch is."

Chuck would later confide to the Star Tribune's Amelia Rayno in 2013 how the episode affected him: "It hurt...I mean, I'm human. I can't even give you any details. It was like an out-of-body experience ... that's the part of my life that's like, 'Really?' It really meant that much? You're trying to hurt me, knowingly throwing a quarter or a marble or something at me? It's twisted. It made me bitter about Minnesota, definitely."

As a longtime Twins fan, it should be obvious to the reader that I'm embarrased this ever happened. Yet, I think it fair to add this bit of clarification: had Chuck had a sense of humor about himself during his career, and not taken himself so seriously, he might have endeared himself as one of the more beloved Twins before he left. It may have mitigated the ugliness of May 2, 2001. So, in that sense he had it wrong: Twins fans felt they DID know him, and some felt he deserved this treatment. If you can imagine.

I don't foresee similar flareups with the returns of Joe Nathan, or Michael Cuddyer or Jason Kubel in the future.


In the final analysis, there should be some credit given to Twins management; they had doubled the security contingent in left after situations on a relatively minor scale disrupted the Monday game. But with the opportunity for the Twins to win the 3-game series at hand, a 16,000 fan walkup besieged the Ticket offices Wednesday.  It caught the Twins off guard with their surprising success of that early 2001 season, according to Dave St. Peter. It was their biggest, mid-week attendance in 13 years in April or May.

In retrospect, I don't think it can be disputed that Chuck Knoblauch was by far the best second baseman in MLB over 1995-1996. Furthermore, if you focus on peak performance, he had the best all-round years for any Twins second baseman in their history. That would include Rod Carew (with the exception of his ridiculous 1977 MVP season - but of course, he was a first baseman by then!).

High Heats Stats also takes this to a greater, detailed level in it's analysis of Knoblauch's superior seasons, "Five Fascinating Facts About Chuck Knoblauch." Truly illuminating, that he was besting a Hall of Famer in Roberto Alomar.


It can be stated that trading Chuck for players like Guzman and Eric Milton undoubtedly bettered the product on the field, helped keep the Twins in Minnesota, and staved off contraction in 2001. Just another reason that residual bitterness towards Chuck Knoblauch is misguided and stupid.

As our announcing friend Herb Carneal put it:
So long, everybody!" - TT

Information from a May 4, 2001 Online Athens article was also extremely helpful in this recap.


Here's a You Tube video from '97 that foreshadows Knoblauch's eventual departure from Minnesota.
Then there's this story on what Chuck Knoblauch is up to these days, from a summer, 2011 StarTribune feature

Bleeding Yankee Blue posted this interview with Chuck in Aug., 2011.
Posted by ClassicMNTwins at 8:21:00 PM

I hated that move. It was another case of the Yankees getting who ever they wanted and the Knob was a huge part of that nfuriating Yankee run. I was so happy when I heard he had re-upped with the Twins only to hear he forced a trade. What??? He was signed to a long term contract. The Twins were under no obligation to trade him, and shouldn't have. I hated Knoblauch after that,happy to be with the Yankees and with the way he would lean into pitches to get an HBP. Shame on the Twins then and now for that pitiful team they run out there.

You had me until chastising Knoblauch for not having a sense of humor. People are who they are. The trend right now is to bully people like this (see Milton Bradley)
You can sit on your pedestal and pick apart their personality and say yeah no wonder people hate you

Can't go with you, twinsfan15. You're equating my making a judgement as "bullying," calling Chuck's bad behavior for what it was. That's being HONEST. There's a difference, friend. I guess you would refer to Milton B. as a "complex," or "misunderstood," guy, LOL. And since it's MY blog, well, yes, I'll enjoy that platform, or "pedestal" as you call it.

Love this post. This was truly a very intense and odd game for the Twins. I remember watching from home and being dumbfounded by what was happening.

Part of me wishes the Twins could still have a good relationship with Chuck Knoblauch, but a lot of me thinks his attitude and his actions off the field made this justified. Not in the sense we should ever do this, but if it happened to one person.... He wasn't exactly undeserving.