On Thursday night, the Twins' AAA affiliate minor league Rochester Red Wings were defeated by the Syracuse Chiefs (Washington Nationals AAA team) and the sensational 2009 number one draft pick Stephen Strasburg.  Interesting writeup in the StarTribune by Michael Rand, with impressions of the new star by some of the Red Wings players and coaches.  Here's another take by Joe Posnanski for SI.com, one of my faves. 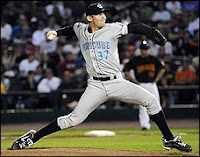 I have extra interest in Strasburg's career, as I made him a sleeper pick in my fantasy baseball league [CUE IMAGES OF GEEKY NERDS DRAFTING PLAYERS IN MOTHER'S BASEMENT], having stashed him in my reserves category for the entire season.   His performance on Thursday (see box) against the Red Wings did nothing to dispell the hysteria about him, as reported by Danny Knobler at CBS Sports ...and now, there is some possibilty that the kid will make his major league debut against the Pirates on Friday night this week because of injuries in the Washington Nationals' pitching rotation!  Ooooooh! 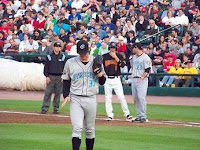 Check out the You Tube video of Strasburg I've posted before this one!

[above photo] No, I don't seriously believe the Twins called up Trevor Plouffe for Friday night's game merely because he got an infield hit off Strasburg the night before, right? Right??