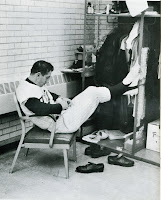 Much has already been said and written about the August, 1969 bar fight involving Manager Billy Martin and Dave Boswell.  So, I thought I'd merely post these photos of the major particpants, plus this link describing that incident.  He also let it all hang out in another incident, this time with Cubs pitcher, Jim Brewer, in 1960.

Needless to say, the thoughtful, reflective photo of Martin and "always ready to oblige the little people" pic tend to belie Martin's tendency to knock an opponent's teeth out first and discuss Socractic dialogues later.  And the wonderful irony therein is all the justification for inclusion here. 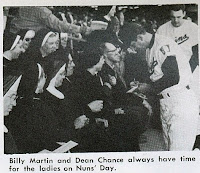 "Nun's Day"?  Really? Hopefully, the sisters were advised to be on their best behavior, what with Billy lurking.
I don't suppose the Twins have gone so far as to schedule a "Muslim Clerics" day in the near future at Target Field?
Posted by ClassicMNTwins at 10:43:00 AM

...not to mention Chance's past affiliation with Bo (Never Met A Woman I Didn't Love) Belinsky, and they'd better be leary!