[EDITED July 19, 2014 - the sister post to this piece is at this link, following Campbell's road to becoming the first-ever free agent under the new bargaining agreement in the post-Dave McNally / Andy Messersmith era] 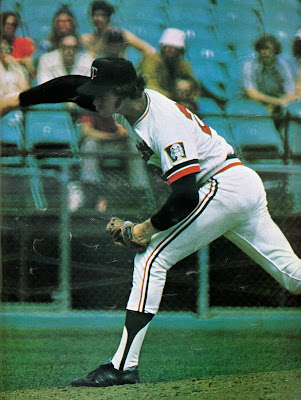 So much of the spring training discussion of the 2011 Minnesota Twins has revolved around their bullpen, specifically the interesting closing tandem of Joe Nathan and Matt Capps.  The early blueprint has Capps shifting into the closer's role when Nathan has already pitched consecutive games.  This is a fortunate luxury that will hopefully pay dividends for Nathan's career as he seeks to regain his form as perhaps the greatest closer in Twins history. That's basically why they gave up top catching prospect, Wilson Ramos, to have somebody like Capps available to pitch that closer inning at the end of games while Nathan recovers. But there was a time in Twins history when their closers pitched far more innings at the end of games - and in fact, functioned essentially as starting pitchers on a smaller scale! Enter the Twin pitcher voted the Rolaids Relief Man of 1976 as Exhibit A John Swol had a fine summary of Bill and recorded an interview you can playback at his Twins Trivia site.

There weren't too many relief pitchers better than Bill "Soupy" Campbell﻿ in the mid-1970's. He became the Twins first free agent to leave Calvin Griffith's plantation, on November 6, 1976. Griffith was an owner from the old school, tightfisted, and he battled players down to the last nickel during contract negotiations. Campbell was definitely in that era's category of excellent relief pitchers, a list including Sparky Lyle, Goose Gossage, Bruce Sutter and Kent Tekulve. His 1976 season was astounding...and just look at his multi-inning appearances...it boggles the mind now!  However, you should first sing along to Dylan's 1976 "Maggie's Farm" Video beforehand, substituting "Calvin" for "Maggie" in the chorus!

In that Bicentennial summer, Bill Campbell could brag about his: 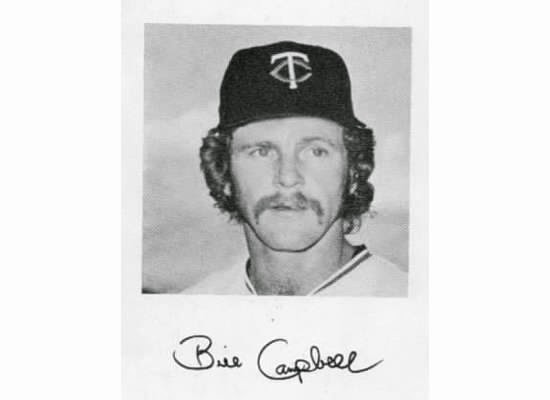 This guy was money in the bank when he came into a game!  Funny, how you never really hear his name mentioned among the great Twins relievers much at all.  But I remember him quite well, those long arms whipping around from behind his body, making his ball hard to pick up for the batter.  He moved on to the Red Sox the next season, before the Players Union installed a controlled trickle
of free agents:

"The now-powerful players' union negotiated it [the reserve clause] out of existence in the 1970s, setting up the lucrative free agent era. Union head Marvin Miller, who knew that universal free agency would be just as bad as having no free agency, negotiated a system based on service time for potential free agents." - from Answers.Com

In short, instead of letting everybody into the pool at the end of their contract, Miller was wise to create a trickle flow of free agents.  The lower supply would serve to increase the individual take in player contracts.  Too many high level players would dilute the money pool, so the control was set up.  But before that, his agent, Larue Harcourt (see photo), negotiated Bill's big pot of gold - 5 years, $1M - with the BoSox (why, oh why, do people say these agent / lawyers have sleazy names?). In any event, his exodus from the Twins wasn't preordained, and hi staying in Minnesota received a lot of conjecture during and after the season (see page one of this feature from The Sporting News (Oct. 16, 1976) and also the conclusion to the piece on page two. 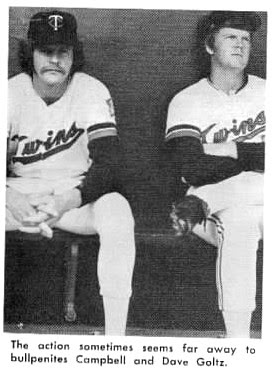 A face that would have served him well as a
bit actor in a western barroom scene.
Appropriate, as 1970's baseball was a lot like ...
well, the wild, wild west.

By today's rules, a player only becomes eligible for free agency after 6 years of inclusion on the team's 40 man roster. Under that format, Campbell wouldn't have become eligible to bolt until after the 1978 season. As it was, within three years, the Twins lost Campbell, Bert Blyleven (his trade preempting his all-but-certain free agency), Larry Hisle (team's top slugger), Lyman Bostock (Twins best pure hitter after Carew), Eric Soderholm (starting third baseman), and Dave Goltz (staff ace after Blyleven).  It was all sickening stuff for Twins fans to stomach - the exodus from the shantytown and cotton field that our (now-lovely) Twins Territory was. It made it ever more difficult for the club to compete in the late 1970's...gone was their chance to win another pennant (or two) in those years.