Butch Wynegar, 1976:
The Bicentennial Backstop...
SORRY! POST BEING FIXED!
[NOTE: due to monumental material for use in this post, and my aching, sentimental attachment to the subject, the sections on John Castino and Carlos Gomez will await another time for publication, to give them their just due!] 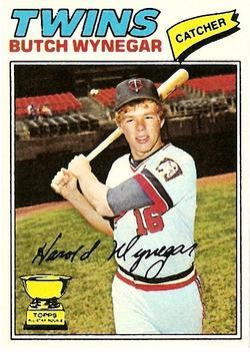 During the winter of 1975-76, Butch Wynegar was expecting nothing higher than a promotion to Triple A, or at least a Double A hop upward in the Minnesota Twins system.  So, it was with shock that he opened up the  letter from GM Howard Fox informing him of his invite to the Twins Major League camp. The needle on the Donna Summer "Love To Love You Baby" LP made a sudden skip, his mind screeching with it to a halt...

His surprise was realistic.  Even though he'd batted .315 at age 19 in 1975 for the Twins A-level Reno Silver Sox, he'd only played in 199 games over two minor league years, and that was including the 60 games he'd played previously in rookie league after being drafted #14 in the 2nd Round (38th overall) of the 1974 draft.  "I thought, 'You've got to be kidding,'  said Wynegar after he retired. "I expected to get a quick look and be sent to Triple A. I was excited being around players such as Rod Carew and Larry Hisle.  But there wasn't much pressure on me.  I had nothing to lose.  Realistically, I never thought about sticking with the club."

Of note: Dave Bergman had been drafted ahead of him in that round, while Dale Murphy (5th pick-c), Lonnie Smith (3rd pick-of), Willie Wilson (18th-of), Garry Templeton (13th-ss), Lance Parrish (16th) and Rick Sutcliffe (21st-rhp) had all been taken earlier in the first round. One of  the '70s draft bumper crops.

Of course, the Twin were sportin' a bumper crop of lousy-hitting big league catchers, and felt they had nothing to lose promoting Wynegar. Phil Roof was 35 years old, and couldn't be expected to be anything more than a capable, defensive backup. Glenn Borgmann had proved a major bust as a big league hitter. His sickly 1975 .207 BA, .303 OBP, with more walks (45) than RBI's (33) had driven the Twins upper management to pray before the porcelain god, and Manager Frank Quilici to permanent vacation. But they definitely had some alternatives in mind for their '76 catcher (see 'Twins Grooming Wynegar As A Super Mitt Prospect," The Sporting News, of April 17, 1976.

New Twins Manager Gene Mauch quickly became a fan of the switchhitting kid from York, PA.  The old National League skipper told reporters "Butch can turn things around for us. I know he doesn't have much experience, but he can swing the bat, catch the ball, and throw it.  There's just not much more to the game than that" (he, of course, forgot to add "have a working knowledge of hot New York night clubs" and "never ask about the epic '64 Philadelphia Phillies season-ending collapse"). That Mauch-managed team melted under the weight of a thin starting staff and general dissension. Mauch got his wish: Butch would be squatting behind home plate in Arlington, Texas on April 9th, against the Rangers.  The kid notched his first basehit that night off greasin' cheater, Gaylord Perry.  The Butch Show was on the radio, and in the air over Minneapolis-St. Paul!

If the mania for Butch Wyngar never reached the monkey scream hero-status of  Joe Mauer,  he nevertheless made an indelible impression on fans in the upper Midwest.  In a Twins TV spot legendary among Twins fans of that era, he exclaimed "I love this game so much, I'd play it for free," followed by a shot of Calvin Griffith gushing "I love that kid" (other vintage ad videos here). Of course, this didn't do much more to improve Calvin's earned reputation as a cheap, chiseling, old coot, but it was definitely a watershed moment in sports team promotions in Minnesota (see link to Calvin post at link above).

The highlights I take from that season are his home runs against Catfish Hunter in New York, and then, vividly, the one took deep off Jim Palmer at the Met on April 25. In the exhilaration of the moment,  I recall Wynegar rounding third with a smile that was akin to the one on that kid Ralphie in "A Christmas Story" who'd just received his Red Ryder BB Gun for Christmas.  His batting average at one point was as high as .314, and was at .294 just before the All Star break.  The fans got behind him, and rocketed Butch onto the All-Star team on the strength of 560,000 write-in votes.


He played in the game in Philadelphia at the dirty, old concrete outhouse known as Veteran's Stadium.  He certainly didn't "shoot his eye out" or  in the foot, for that matter.  The 20-year old pinch hit for the 76-year old former Twin Luis Tiant in the top of the 7th, drawing a walk off John "The Count" Montefusco. Nicknames! The American League lost, as per custom in those years, 7-1.  The AL in the '70s had only one victory notch on their bats, that being the 6-4 win in 1971.

Even before the AS game, Butch was impressing the old guard with his deftness in handling pitchers, so beyond his years.  That. and his overall defense would become his greatest contribution to his teams as time wore on. He finished the season batting (see game logs) .260, with 10 HR, 69 RBI's, a .356 OBP, numbers which compare fascinatingly to Mauer's 2005 season (as ciphered by Aaron Gleeman, 3/13/06). These stats easily outdistanced the competition on the roster, and basically equaled the league average offensive performance at catcher. He rated a WAR of just over three games for his team that year.

Coming in second to pitcher Mark "The Bird" Fidrych in the '76 Rookie Of The Year voting  was no shame, as he never expected to be in that position anyway.  The whole year was like one big fairy tale for him, sans the talking animals and whimsical characters (a situation left unfulfilled until Mickey Hatcher joined the Twins in 1981).  In my opinion, he never reached his potential - but what the hades do I know?  He hit in a difficult era, 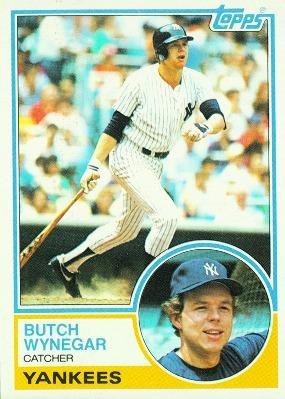 Wynegar  has served as the Milwaukee Brewers hitting coach in recent years, and is employed currently in the New York Yankee minor league system, giving tutelage to their young stars. Most recently, he's been credit for his work with up-and-coming catching stud, Jesus Montero.  By the way, we'll have to cut him some slack on that Yankee thing - they were his favorite team growing up, and some guy named Mickey was his favorite player. Go figure.

He has some interesting comments on the Twins and his first season at this Nov., 2009, YouTube video.  The Kid comes across as really pretty humble.