This Week In Twins History : Calvin Griffith Backs Down On Moving Senators, Sept. 8, 1958

The forces keeping the Washington Senators in the nation's capitol, and away from Minneapolis, were strong and entrenched. For starters, the franchise had been a charter member of the American League since 1901, with not just a history of losing permeating the air, but also the warm, fuzzy, albeit faded memories of pennants, World Series winners, and beloved players.

Calvin Griffith's August 27, 1958 assertion that he'd move the Nats ("Senators") to the Minneapolis/St. Paul area if an acceptable offer was made had prompted President Dwight D. Eisenhower (see below photo) to suggest that Griffith should improve the team and stay in Washington. Then, the pressure on Griffith to stay put was ratcheted up with the inevitable lawsuit. This link to the Google Docs PDF file (AND in the "sneak peak" below) maps out a fraction of the political intrigue swirling at the time, on September 8,1958.

The gist of this page: 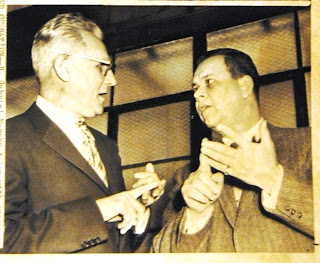 Griffith and AL Prez Will Harridge

Forcing the A.L. owners hand against Griffith was this development ("Sporting News" pdf) that had the Nationals ("Senators") club stockholders suing Cal once bonding was approved to enlarge Metropolitan Stadium, and that on the heels of Calvin so un-diplomatically declaring his desire to pull up stakes - it would have been uncharacteristic for him to adopt a cagey, strategic MO in any event!

Add to this the interesting subtext that included Midway Stadium in St. Paul [cue St. Paulites beaming with pride] as another possible Twins venue in the very same article. Intrigue! As it was, Calvin had now enraged the movers and shakers in Minneapolis with his waffling - and, essentially, EVERYONE was disenchanted with him, including the Commander-In-Chief.

Eventually, the climate would change, the seas would part, and Griffith would garner support for moving with the momentum of developing circumstances (i.e., the "Continental League") and personalities (see  "William Shea").

That source document, if you missed it the first time? The Sporting News - September 17, 1958 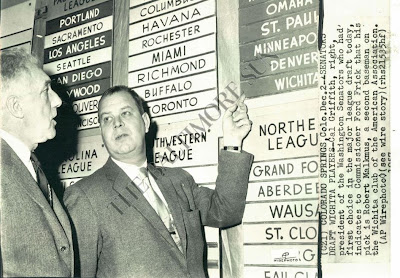 December 2, 1957: from appearances, it looks as if Calvin is ticking off his choice destinations to where he might relocate the Washington Senators. Minneapolis? St. Paul?Denver...or...Wichita??..for MLB Commissioner Ford Frick...actually, he's indicating he's picking Bobby Malkmus of Wichita, in the December, 1957 Rule 5 draft.

Griffith's reasons for seeking better alternatives - poor attendance, stadium location, local support - were legitimate. No, Griffith's brashness wasn't exactly Robert Irsay stealing away with the Baltimore Colts in the middle of the night, semis and U-Hauls in tow. But, by not culturing a favorable audience among fellow owners, or not effectively maneuvering the D.C. City Fathers, he almost doomed the move to Minnesota from the start.

As the great announcer ended his post-game show, I say to you:
"So long, everybody!"  (Herb Carneal)
Posted by ClassicMNTwins at 8:20:00 PM